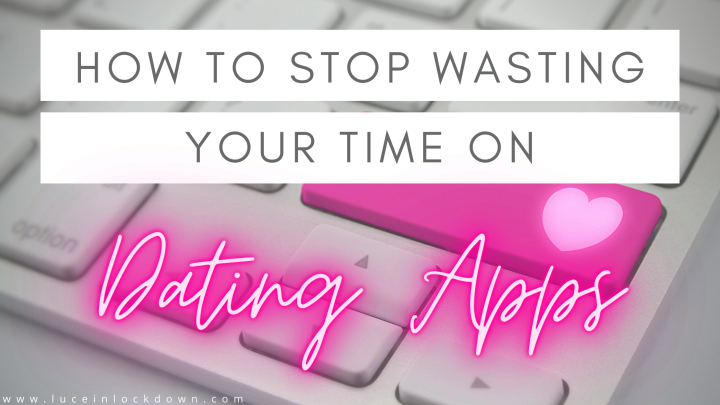 If you’ve been single at any point within the last decade, you will have most likely experienced the crazy world of online dating. Tinder, Bumble, Plenty of Fish, Match, OkCupid, EHarmony, Hinge… the list of dating apps and websites is ever growing. Even Facebook has jumped on the bandwagon!

I met my boyfriend last year shortly after ending a long term relationship, so in terms of single life I haven’t got much recent experience. But my first proper relationship didn’t happen until I was 22, meaning I still had four years of navigating the local dating scene with little (precisely zero) success.

The main problem I encountered during those years of swiping, matching and super liking was that 99% of the men signed up to these apps were simply ‘looking for fun’. (Anyone else hate that phrase? Cyndi Lauper is a liar. My days consist of napping and Netflix – if you want fun, go hire a bouncy castle instead pal) I know apps like Tinder are popular for hook ups and casual dating, but I wanted something more.

So, how do you find someone who wants the same things you do? Well, as hard as it may be to believe, somewhere in that virtual melting pot of fuck boys, commitment-phobes and time wasters, there are men looking for committed relationships. Three of my friends met their husbands on dating apps and you can find love too with the help of my 10 tips on how to stop wasting your time on dating apps.

Disclaimer: This blog does not come with a 30 day love-guarantee. I am far from being an expert on relationships, this advice is written purely from my own personal experiences. Please don’t hunt me down if these tips fail to lead you to your future husband.

1. If you want something serious, make it known from the start.

Put 👏 it 👏 in 👏 your 👏 bio. No, it doesn’t make you look desperate or boring. Any man that is immediately put off by a woman stating that she wants a serious relationship isn’t future husband material. Trust me, this will save you so much time in the long run, as most of the men who are only looking for casual liaisons will swipe left or unmatch you. What’s the point in dating someone who’s not sure if they want a relationship? That’s a one-way, downhill trip to mixed signals village and ghosting city. If you want something serious, it’s time to declare it.

2. Never match with someone who doesn’t have a bio

Self-explanatory really. “But Luce!” I hear you protest, “What if he just doesn’t spend much time on these apps?” Nah, he’s a time waster. Or alternatively so supremely confident in his appearance that he thinks his looks can substitute for an absent personality. Neither scenario is particularly appealing. If he hasn’t bothered to write a bio, he’s not looking for something serious. Fight me.

3. Only swipe right on people you’re genuinely attracted to

If you’re spending more than 30 seconds considering him, he’s not for you. There’s no point swiping right on someone you aren’t fussed about because even if you do match with them, you probably won’t ever message them or reply if they message you. I’m not saying you should reserve your right swipes for Jason Momoa lookalikes, their bio needs to be considered too. Have they written something interesting? Do they have a good sense of humour? Do they seem like someone who has depth and personality? If you find yourself hesitating for any reason, swipe left. The truth is that most people will get a lot of matches on these apps and if you aren’t ruthless when swiping, you’ll end up feeling overwhelmed by a long list of ‘hey’s and struggle to keep up with any conversation. You’re aiming for quality, not quantity.

Controversial opinion incoming: if you aren’t willing to make the first move, you lose the right to complain about being single. It’s 2021, we live in an age where a woman can approach a man without being labelled a harlot and chased through the village by angry mobs with pitch forks. Messaging someone first isn’t a big deal. The trick is not to overthink it. You’ve matched with someone, which means they find you attractive, so push those insecurities aside and just say hey!

5. Have an interesting conversation starter

And so ends what could have been the greatest love story of all time. Who hasn’t had this exact conversation word for word on a dating app at some point? It’s so uninspiring, it’s no wonder one of you ends up not replying when there’s the same boring exchange happening with half a dozen other matches in your inbox. Cheesy pick up lines may provoke a heavy eye roll but at least they give a woman something to reply to! The best messages I received were questions that gave me the opportunity to show the type of person I was when I answered. What is the best opening message you have received from a match? Use something similar to start your own conversations.

6. Meet up sooner rather than later

Stop wasting weeks or months of your life flirting with men over text, only to never meet up with them. Everyone has experienced the disappointment of a conversation with someone great that eventually fizzled out. I realised many years ago that it’s better to meet up with someone you’re interested in ASAP and just see what happens. Another problem with messaging someone for too long is that you risk getting emotionally invested and feeling crushed when you finally meet and find that something’s missing. Asking someone on a date can seem daunting if you haven’t done it before, but after you’ve done it once, you’ll find it easy!

Don’t invite them round to your house. I’m not going to tell you when you should and shouldn’t sleep with someone, but realistically if you invite a man round to your house, he will think you’re up for that trip to pound town. That’s fine if it’s what you want but when you’re looking for something serious, it’s better to organise a proper date for your first meet up. Also, I don’t want to sound like your internet mum, but it’s not safe. Do you really want a stranger knowing where you live? Make sure your date is in a public area and check in with a friend over text before and after you go.

8. Put some effort into your bio

To be blunt, there’s a lot of attractive women on Tinder – relying on your looks alone to get you matches isn’t going to help you stand out from the crowd or to bag yourself one of the few men taking this whole dating game seriously. On a separate note, would you really want to go on a date with someone who’s only interested in your physical appearance? It might feel like a confidence boost in the short term, but it’s better to know you have something in common with the person and therefore a better chance of connecting on a more meaningful level before you meet up.

Don’t hate me, I love a good filter as much as the next person! They just don’t belong on dating profiles. Filters remove every perceived ‘flaw’ from our faces, from the more subtle ones that smooth out your skin to the most extreme that offer a nose job, lip fillers and two stone weight loss in one tap. Save the filters for Facebook and Instagram. You will feel more confident about meeting someone new if you know that the photos they have seen of you are an accurate representation of your real life appearance.

He asked for nudes before you even met. He goes days without messaging you and then replies like nothing weird has happened. He doesn’t want marriage or children and you do. I know this advice is easier said than done because there’s a fine line involved, isn’t there? While you don’t want to ignore warning signs, you also don’t want to be overly fussy and immediately blacklist any man who doesn’t fit your idea of the perfect partner. But all of us have deal breakers and it’s important to know what yours are, and once you know them, be strict with yourself and always enforce them.

So, what do you think of my advice? Do you reckon these tips will help you get better results on dating apps or are you currently wondering why the hell you wasted the last ten minutes or so reading this blog? Let me know your thoughts in the comments and don’t forget to share your own tips for dating online, I would love to read them. And while you’re searching for Mr Right, why not check out my list of the all-time best romantic comedies to add a little romance to your life.

Welcome to Luce in Notts! I’m a Nottingham girl who enjoys writing about life and the city she loves.

If you’re a fan of my blog, you can show your support by donating or simply liking and sharing your favourite posts.