When I was younger, Halloween was my favourite time of year. Some of my best memories involve trick or treating with my dad and sister, and (several years later) getting drunk at fancy dress parties with my friends.

Nowadays I still enjoy Halloween, but I prefer to embrace the spirit of the spooky season in ways that don’t involve knocking on strangers’ doors and asking for sweets (although if I could get away with it, I totally would!)

There’s lots of Halloween events for adults happening in Nottingham this year, from horror film screenings to ghost hunts and club nights, so why let the kids have all the fun? Here are 13 of my favourites.

Who said Halloween films have to be scary? ‘Hocus Pocus’ and ‘The Rocky Horror Picture Show’ prove that guts and gore aren’t always needed to make a Halloween cult classic. Whether you’re in the mood for magic or doing the time warp, Adventure Cinema brings you an al fresco film experience, set in the stunning surroundings of Wollaton Park (a.k.a Batman’s estate).

Did you know the National Justice Museum has been named one of the most haunted buildings in the UK? This Halloween special event invites you to ‘walk in the steps of the condemned’ on a tour of the former prison and court, from the cells right through to the gallows, and discover true crime tales from Nottingham’s sinister past along the way.

The Labyrinth — Corn Evil & The Village

Notts Maze is upping the fear factor especially for Halloween. This October, the popular Nottingham attraction will transform into an immersive scare maze, formidably known as ‘The Labyrinth’. Your mission is simple: escape the maze — but beware, monsters and mayhem lie in wait behind every turn…

It wouldn’t be Halloween without spine-chilling ghost stories. With an impressive 4.5 star rating on TripAdvisor, the Original Nottingham Ghost Walk is the city’s most popular walking tour, sharing gruesome stories from local history with tourists all year round. Tread carefully and stay close to your guide, as you will visit some of the most haunted locations in Notts.

If you love horror films and scare attractions, you need to get tickets to PRYZM’s immersive cinema attraction. Prepare yourself for an intense evening spent on the edge of your seat, as scares on the silver screen combine with the added suspense of live horror actors for a truly immersive and memorable Halloween experience.

Join Haunted Heritage for an after-dark paranormal investigation at Newstead Abbey, Lord Byron’s famous Nottingham residence. There have been countless reports of ghosts at this 800 year old stately home over the years and ghost hunters will be hoping for more supernatural sightings this Halloween.

Horror film lovers won’t want to miss this frightful film fest at Broadway Cinema, showcasing some of the best horror, sci fi and cult flicks from across the world. The four-day cinematic event has a busy line-up with 15 films on the bill, including UK premieres and archived screenings, as well as special events.

In the same year that E.T was released, there was another, not-quite-so-friendly extra terrestrial being terrifying audiences through cinema screens. Although it was a box office flop, Hollywood horror film ‘The Thing’ has since gained a cult following and now fans, new and old, can watch the sci-fi classic in Nottingham’s oldest cinema for one night only on Halloween.

‘The Butcher’ at Escapologic isn’t for the faint-hearted, but if it’s a fear-filled Halloween you’re after, this horror themed escape room is a great choice. I attempted to defeat ‘The Butcher’ a few years ago and to this day it remains the most immersive scare attraction I’ve ever experienced — in fact, I was so terrified that I had to exit the room early, leaving my team to complete the challenge without me!

Many bars and clubs in Nottingham host Halloween events but, for me, Rock City’s legendary all-nighter is where it all began! Think 3,000 people and 10 hours of non-stop partying with drink offers galore and costume prizes. Even if Rock City isn’t your usual vibe for a night out, it’s a fantastic place to celebrate Halloween.

The only thing better than a Halloween party is a Stranger Things themed Halloween party. Thanks to Rescue Rooms, you can spend All Hallows’ Eve in the Upside Down, dancing to 80s hits like Kate Bush’s ‘Running Up That Hill’ and other hit tracks from the series. Fancy dress of all varieties is encouraged, be it Stranger Things characters, 80s costumes or standard Halloween attire.

Join Detonate for a drum and bass takeover of Motorpoint Arena this Halloween. With music from d&b icons like Chase & Status, Hybrid Minds, Holy Goof and Friction, it promises to be a party of epic proportions. If you like your music loud and your bass lines heavy, book your tickets fast because this is set to be a sell-out.

Head to Nottingham’s newly opened SKYBAR (previously Alto) for a thrilling rooftop party. As well as an exciting line-up of artists and DJs from the house, garage and bassline scenes, there will be live fire dancers and magicians to entertain party-goers throughout the night. It’s strictly fancy dress and you’ll want to make an effort because there’s prizes to be won. 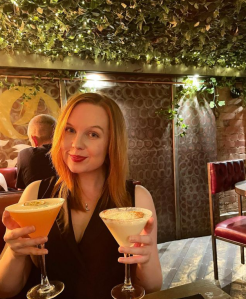 Welcome to Luce in Notts! I’m a Nottingham girl who enjoys writing about her city and all the amazing food, drink and culture it has to offer.

If you’re a fan of my blog, you can show your support by liking and sharing your favourite posts.